When you're looking for a new apartment to rent, it's often hard to figure out if a price for a specific place is "good" or "fair".

It's useful to have a visual overview of prices of similar properties in the same area.

In this tutorial, we'll use Streamlit to visualise rental prices in Bern, Switzerland, and allow the user to filter by number of rooms and area. 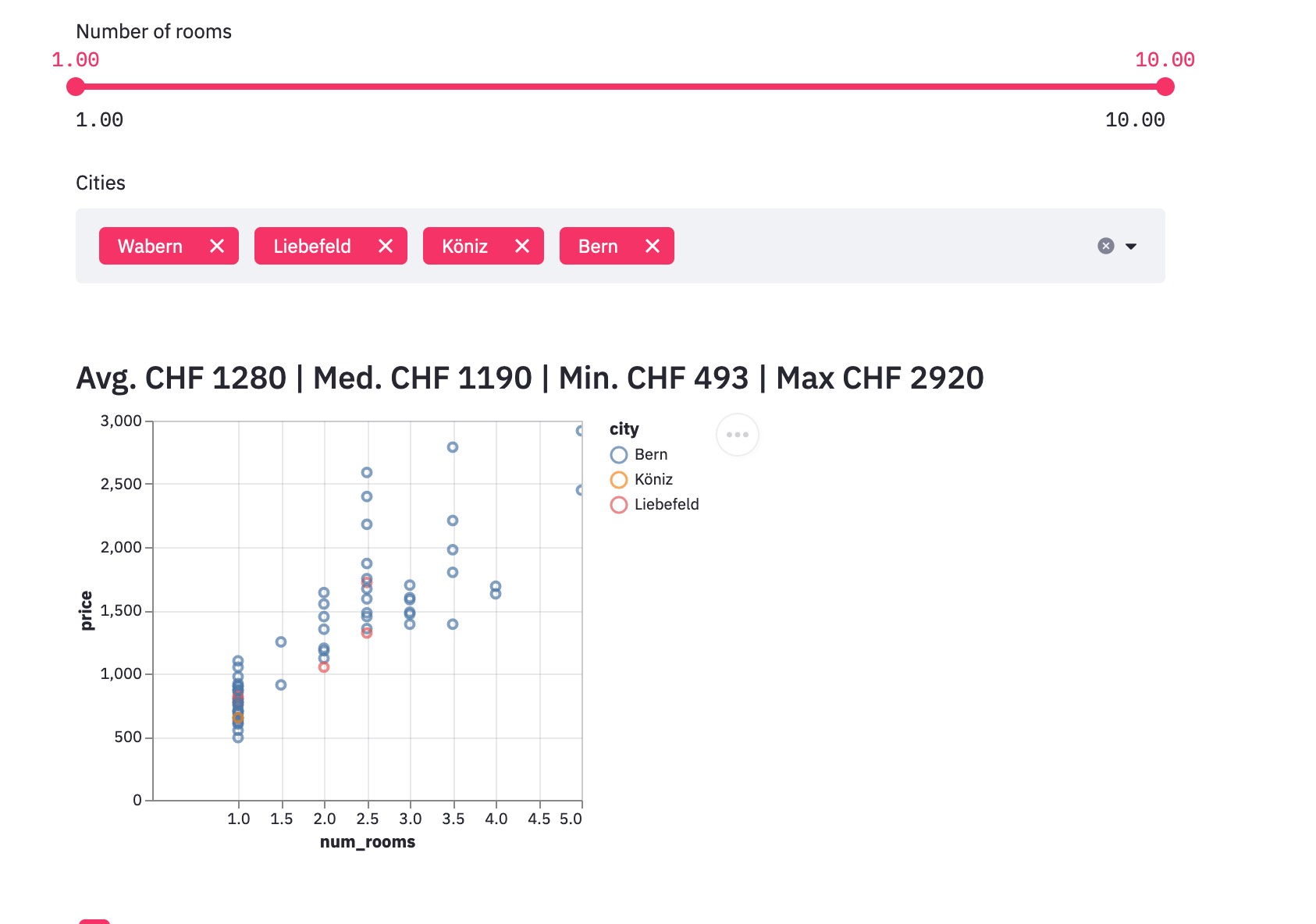 This tutorial expands on the Streamlit data explorer example by adding some more advanced controls, including

We'll go through all of this step by step so that you can easily pull our the parts you need into your own application.

Our dataset contains a number of columns. It's already clean, so we don't need to make many changes. We are mainly interested in the "price", "num_rooms" and "city" columns.

Create a file called app.py and add the following code.

This imports the libraries we will be using.

We then define a load_data function which reads the file and c reates some convenient human-readable versions. The Price colum n is based on the existing price column (note the capitalisatio n difference)n and formats each price as an integer with a curren cy string (CHF, which is what the Swiss use for their currency instead of a symbol like "\$") and similarly for the Size.

This function then gives us a Pandas dataframe from the file, which we can use to pass data to Streamlit and filter based on user input.

Adding text to our application

Right below, add the following code

This sets the title of the page and gives some text to display while the data is loading, which it then removes once the data has loaded.

Adding user controls to our application

Now let's set up some controls for our user to filter the data. Add the following to your app.py file below the existing code.

This sets up some user controls. A slider for the user to set the min and max number of rooms. We specify that the user can select between 1 and 10 rooms and we set the default to include all sizes (1-10).

We then set up a multiselect, which restricts the choices a user can choose from but lets them choose many (unlike an options control, where the user can only select one option). We create a set from our city column to get all the unique cities in our dataset (most are in Bern, but there are some in outlying towns too).

Filtering the data based on user input and calculating aggregate statistics

Now add the following code to your app.py file - again, below the existing code.

We can now calculate the mean, median, minimum and maximum prices of the remaining properties. Pandas provides convenient functions for all of these.

Finally, we add a markdown row - equivalent to an <h3> HTML tag to make the aggregate numbers more noticable and show the user this data.

Viewing the aggregate data is useful but doesn't help the user as much as being able to visualise this dataset. Let's add a chart with one point for each property. This will show how properties tend to get more expensive as you add more rooms.

Add the following code, again below the existing code in app.py.

Streamlit provides some higher-level convenience functions around the plotting library Altair, but we want to customize some aspects so we will drop down a layer and use the Altair API directly.

We can then create the Chart using points and specify that we want num_rooms as the X-axis and price as the Y-axis. We'll also set a tool tip (mouseover text) for each point to show the description, post code, size, and price for each property and specify that the chart should be interactive (the user can pan around and zoom in and out).

Finally we add the chart to our UI by passing it to st.altair_chart.

That's it! You can run the application with streamlit run app.py and you should be able to see the visualisation and change the filters as you want.