You can manage your app directly from the deployed app in your developer view or you can log in to your app dashboard at share.streamlit.io to view, deploy, delete, reboot, or favorite an app.

Manage apps from your developer view

Once you have deployed an app you will have a developer view for that app.

Click on the bottom right where it says "Manage app" to view your Cloud logs and other settings. 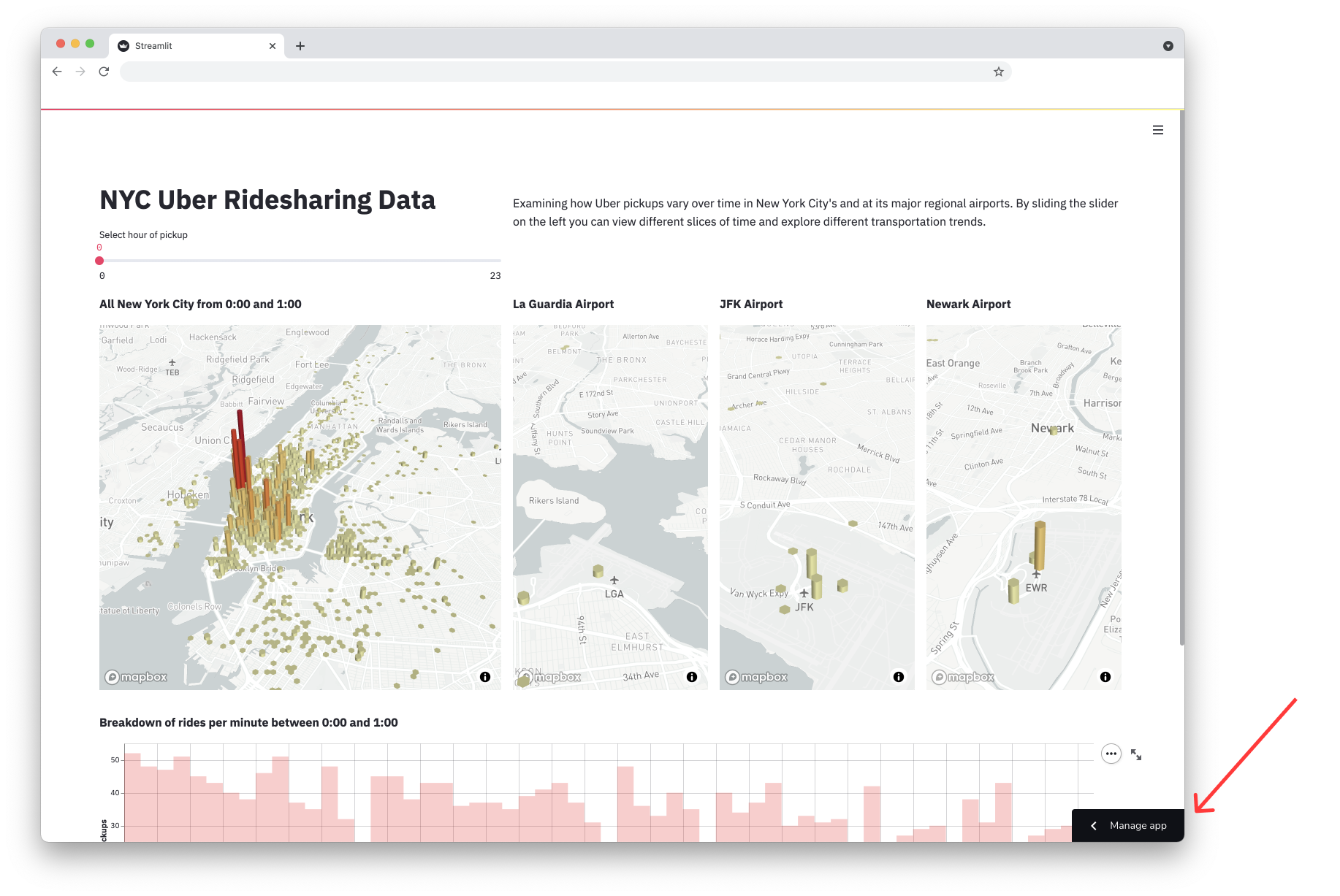 Once you've clicked on "Manage app", you will be able to view your app's logs. This is your primary place to troubleshoot any issues with your app. 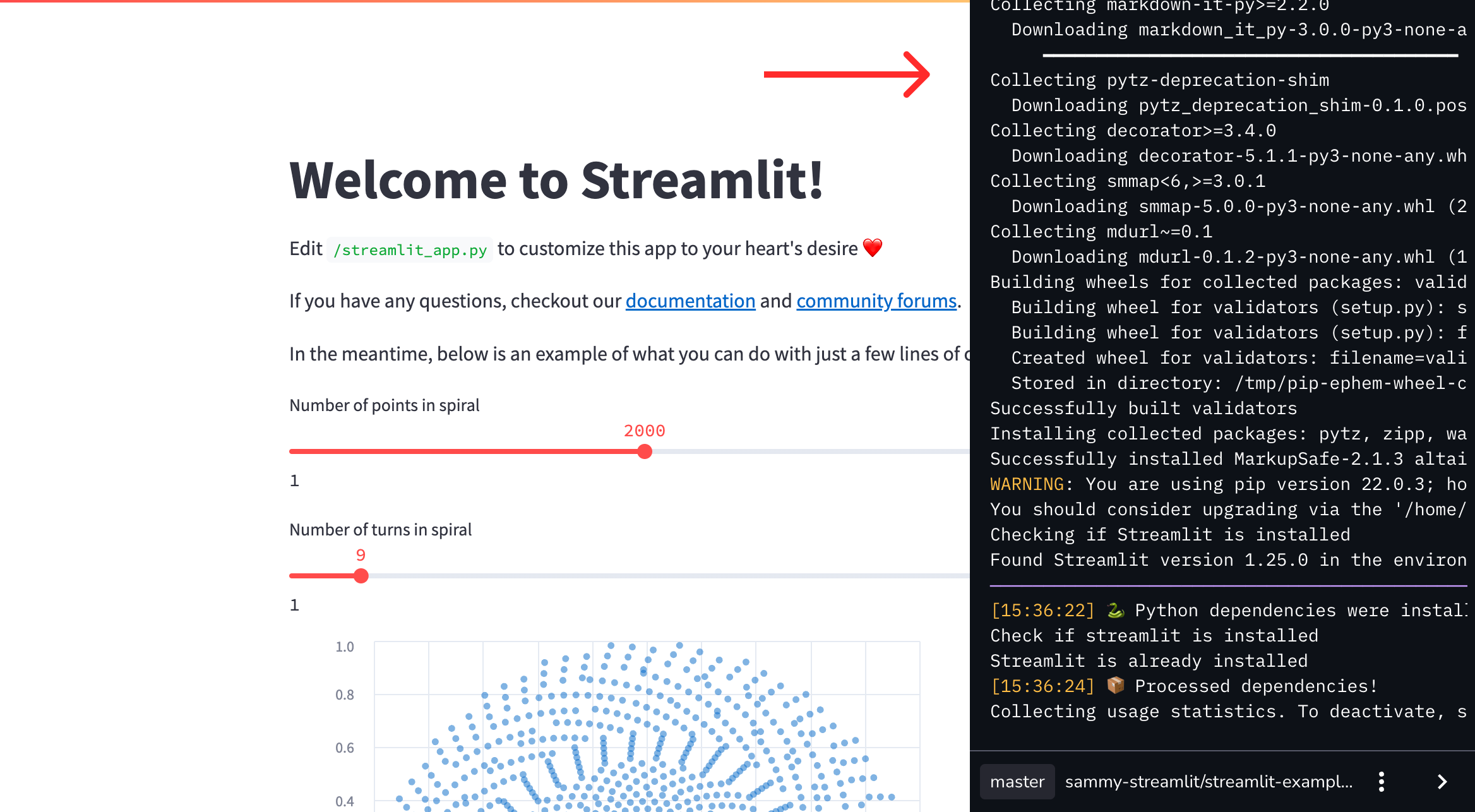 You can also click on the "︙" overflow menu at the bottom of the Cloud logs to view other options for your app including the ability to download logs, reboot the app, delete the app, navigate to settings (which includes managing viewer access and app secrets), go to your app dashboard, go to documentation, contact support, or sign out. 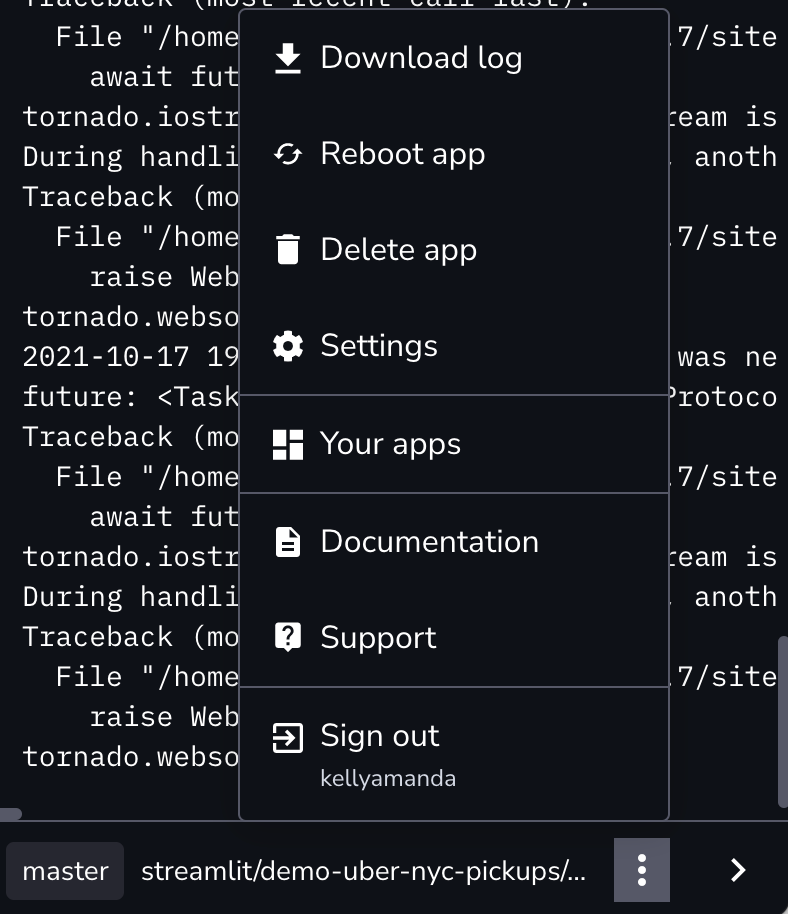 Manage apps from your app dashboard

When you first log into share.streamlit.io you will land on your app dashboard, which gives you a list of all your deployed apps. This list does include apps deployed by other developers in your workspace, since you're all managers of those apps. Such apps are indicated with an icon like this one:

Streamlit Community Cloud is organized into workspaces, which automatically group your apps according to the corresponding GitHub repository's owner. If you are part of multiple repositories, then you will have multiple workspaces. 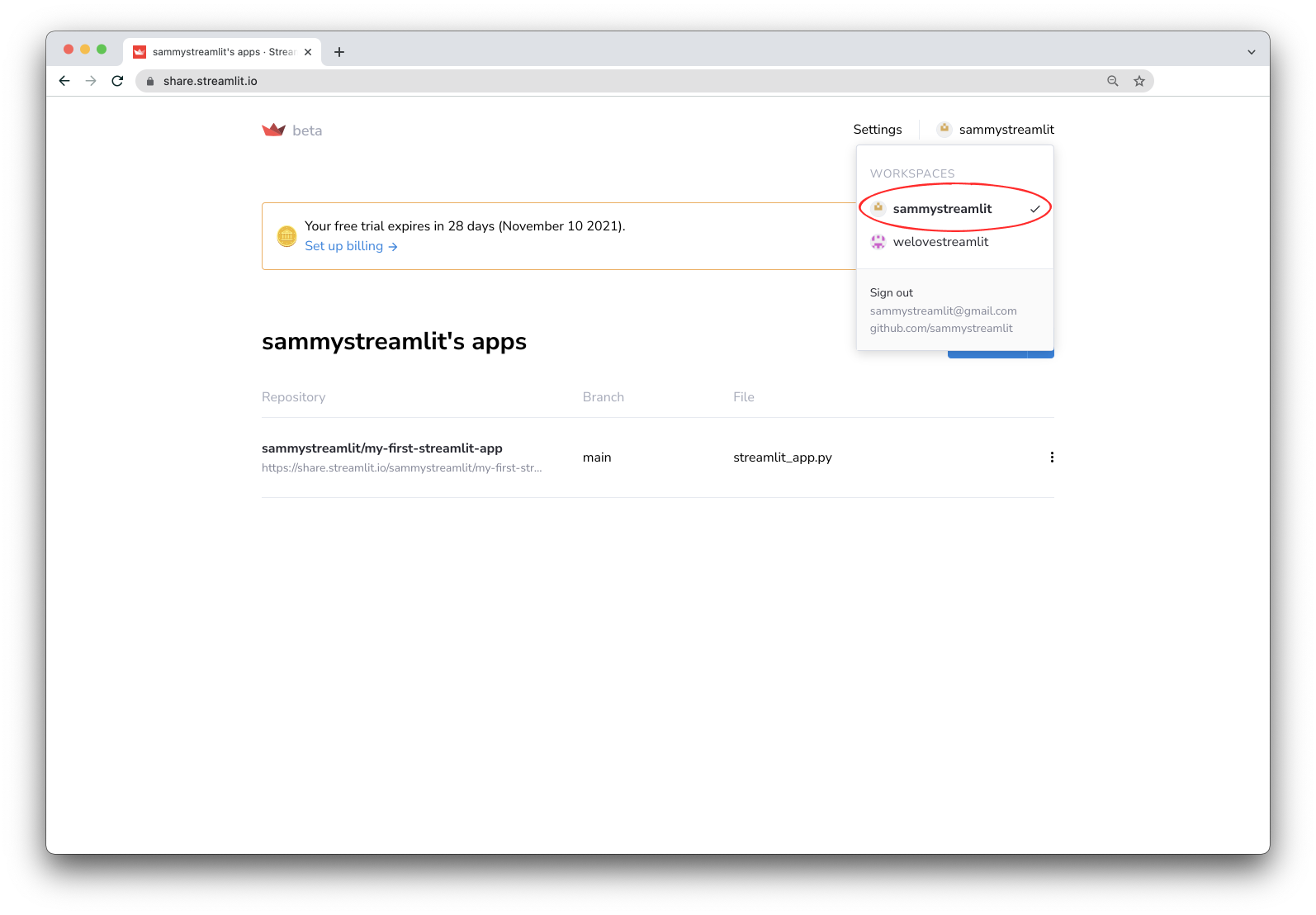 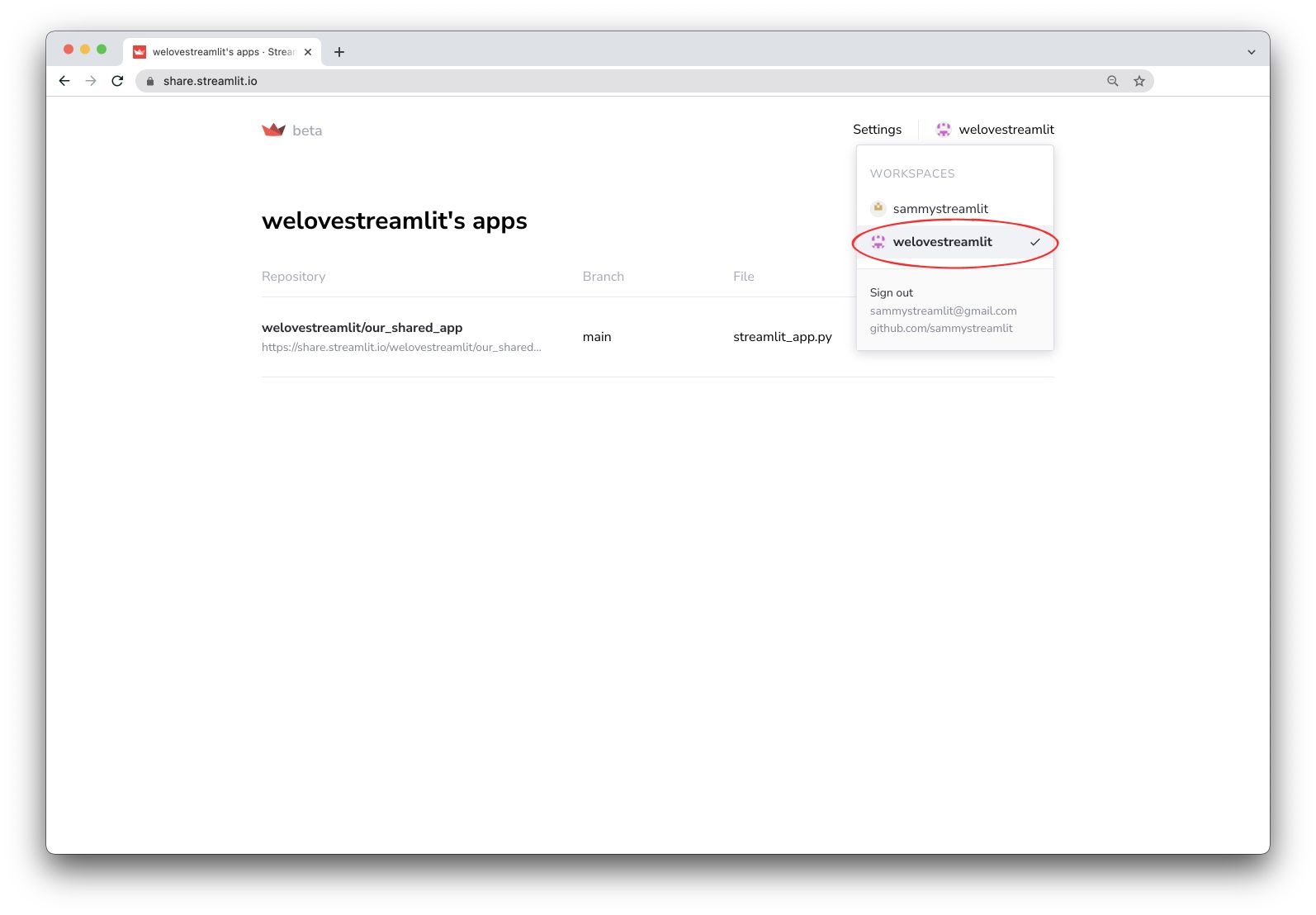 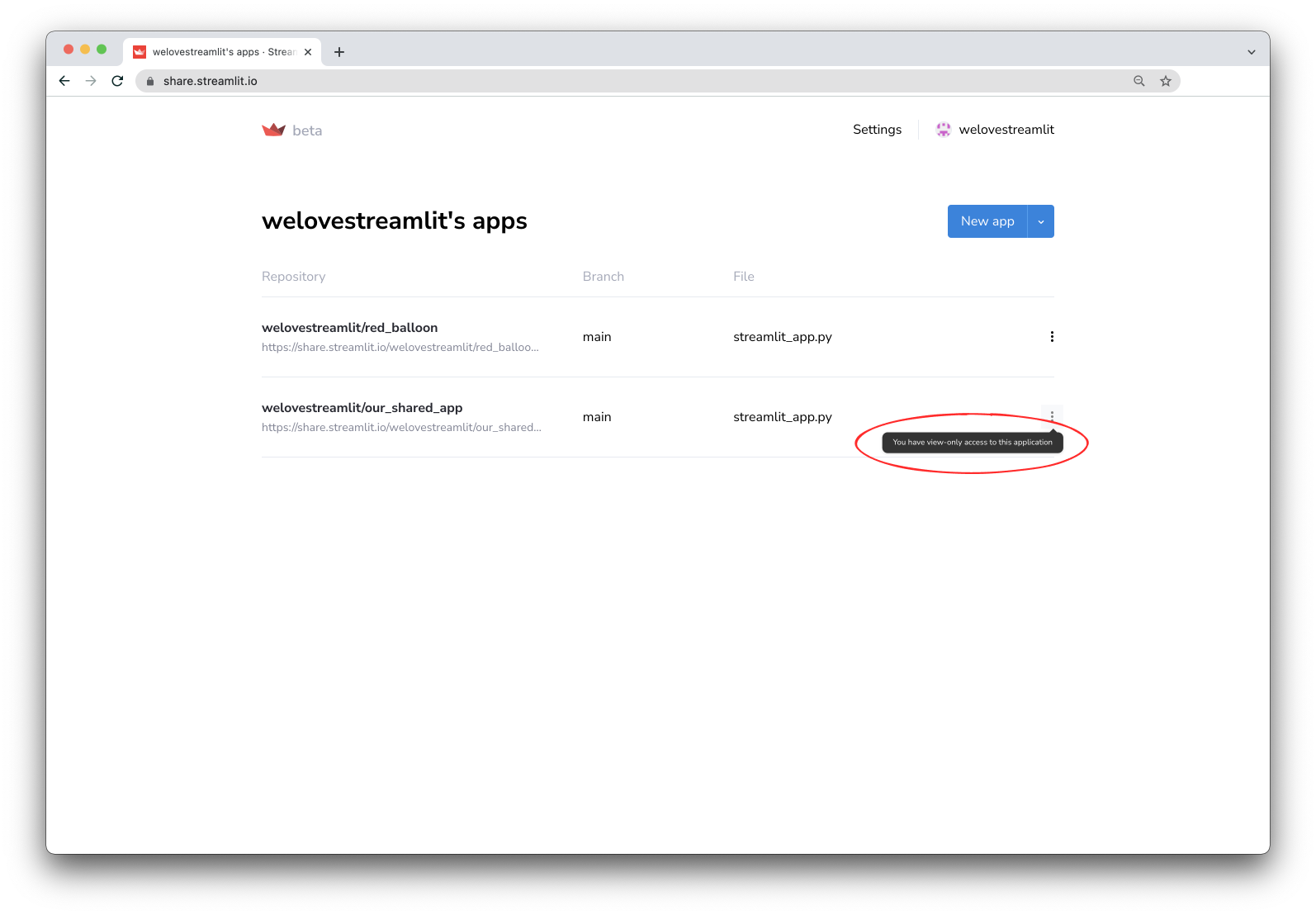 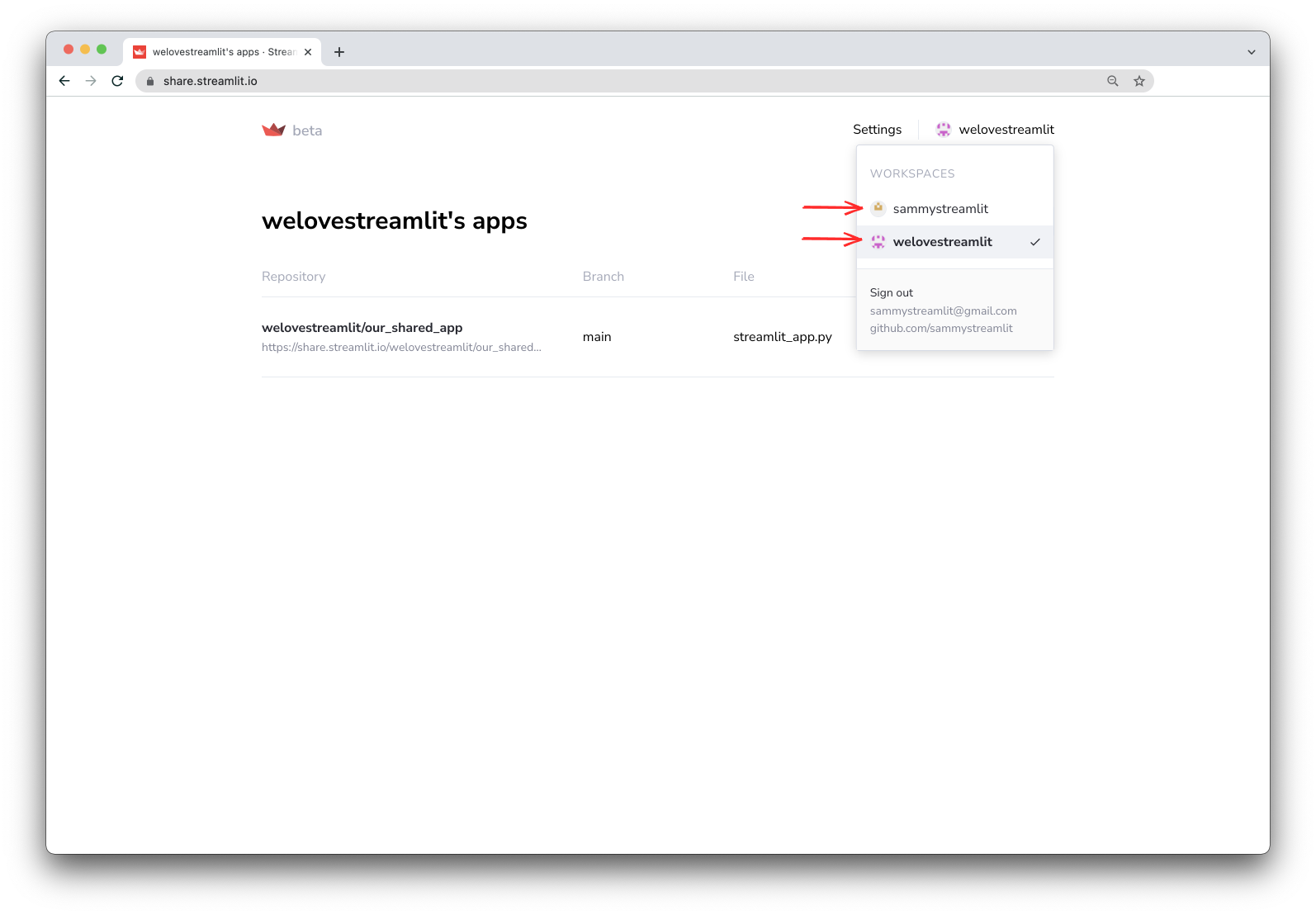 The app settings let you pick a custom subdomain for your app, manage viewers of your apps and secrets of your apps. Click on the links to lean more about these features.

Streamlit also smartly detects whether you touched your dependencies, in which case it will automatically do a full redeploy for you—which will take a little more time. But since most updates don't involve dependency changes, you should usually see your app update in real time.

All Community Cloud users have access to the same resources and are subject to the same limits (1 GB of RAM). If your app is running slowly or you're hitting the 'Argh' page, we first highly recommend going through and implementing the suggestions in the following blog posts to prevent your app from hitting the resource limits and to detect if your Streamlit app leaks memory: 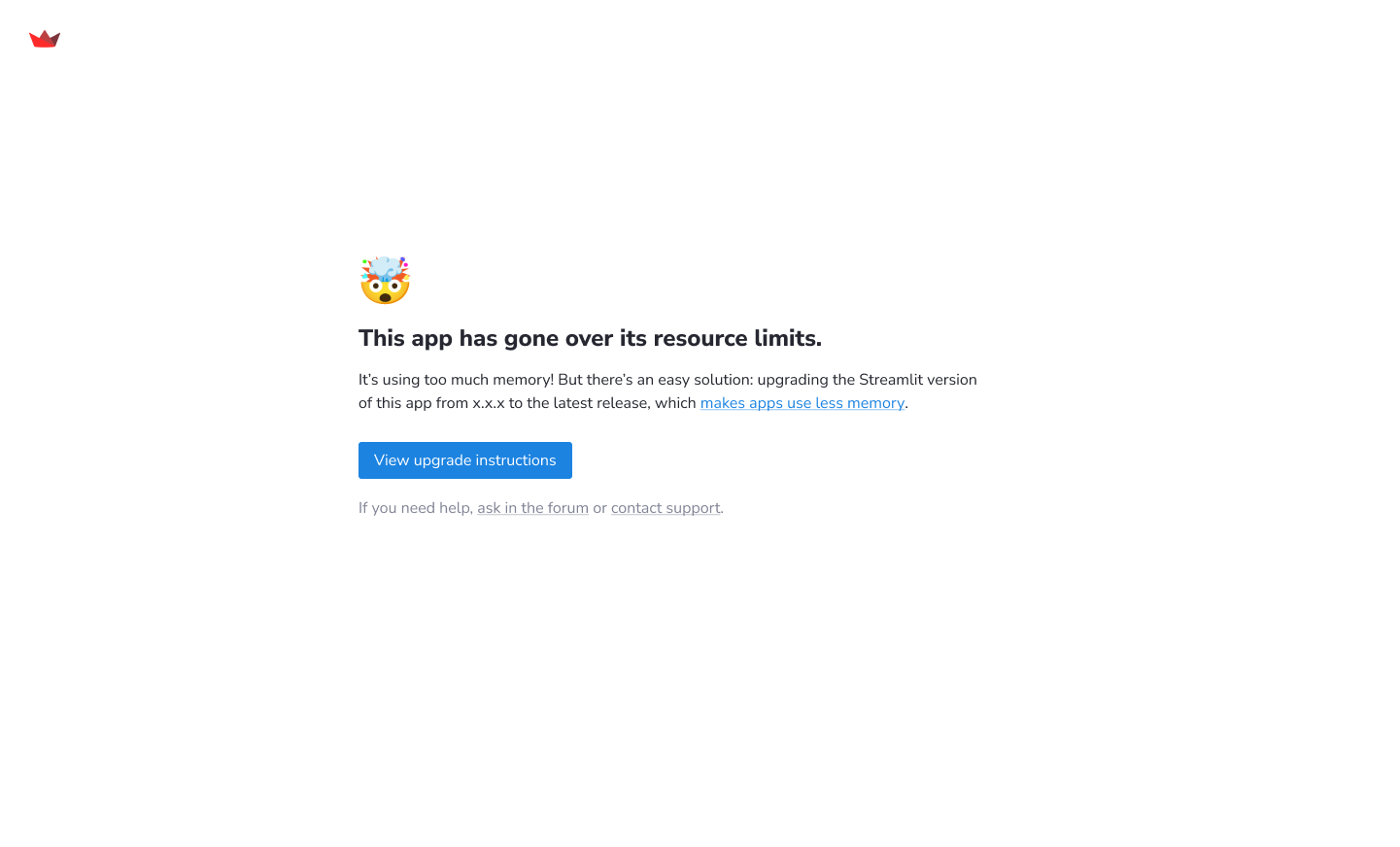 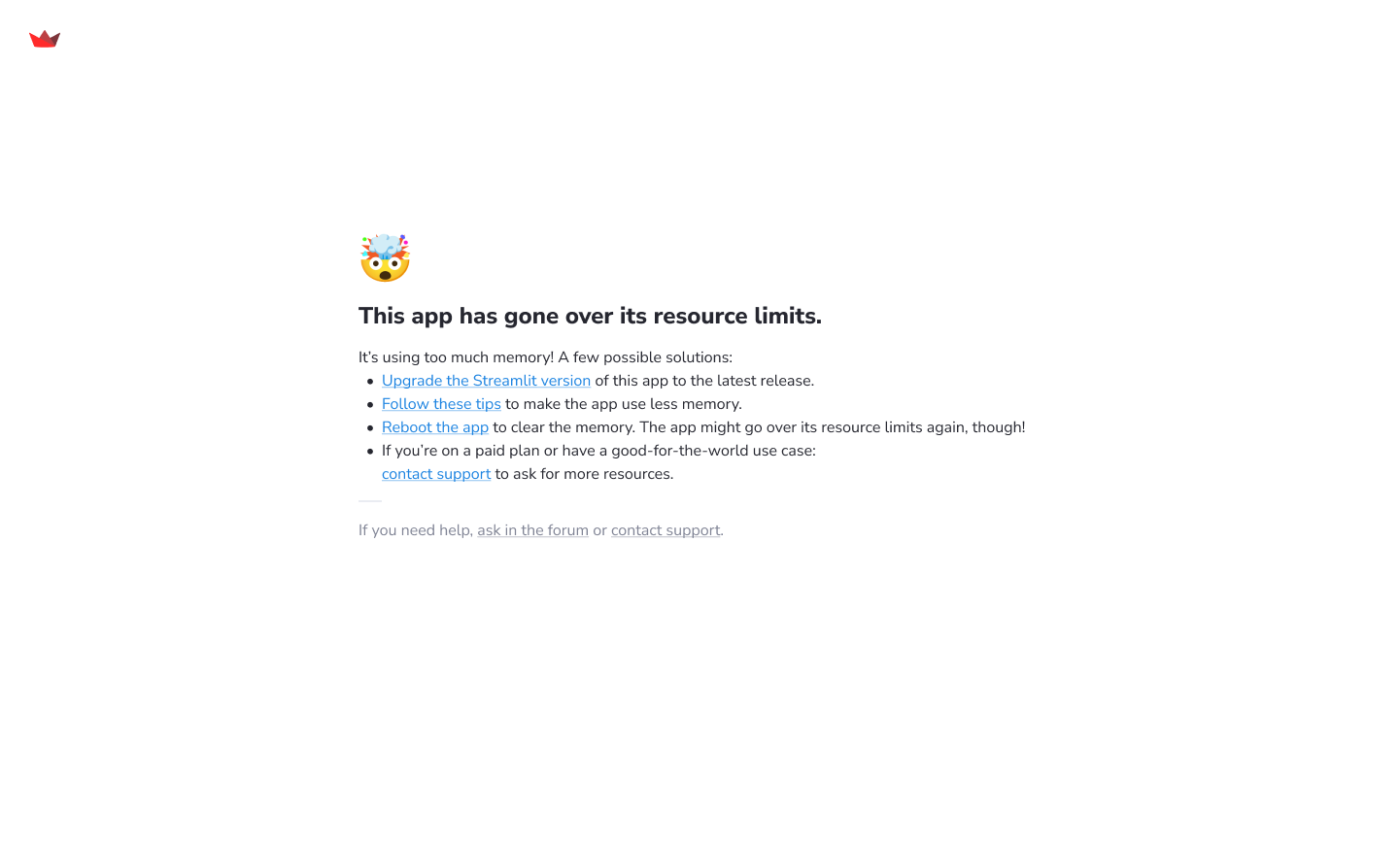 Similarly, you will receive one of the following two emails from alert@streamlit.io with the subject "Your Streamlit app has gone over its resource limits 🤯": 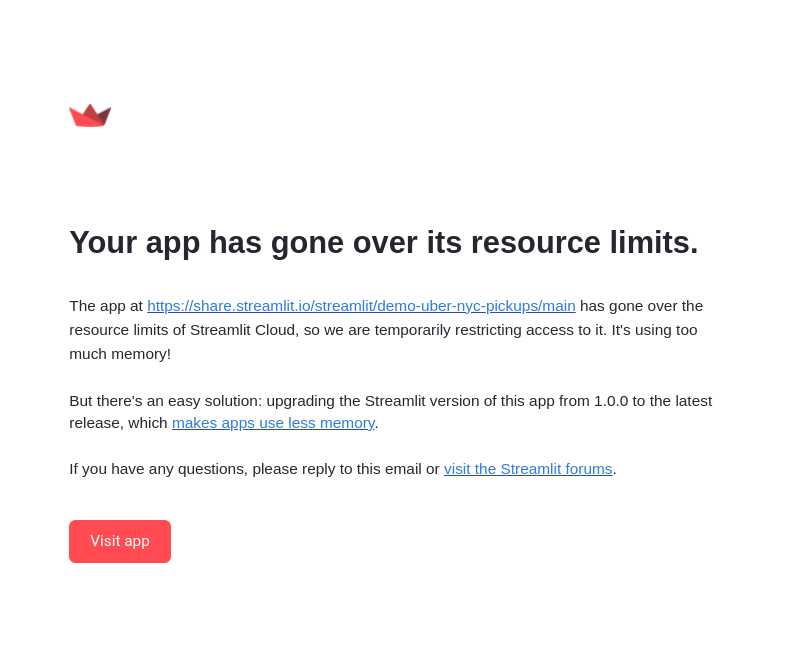 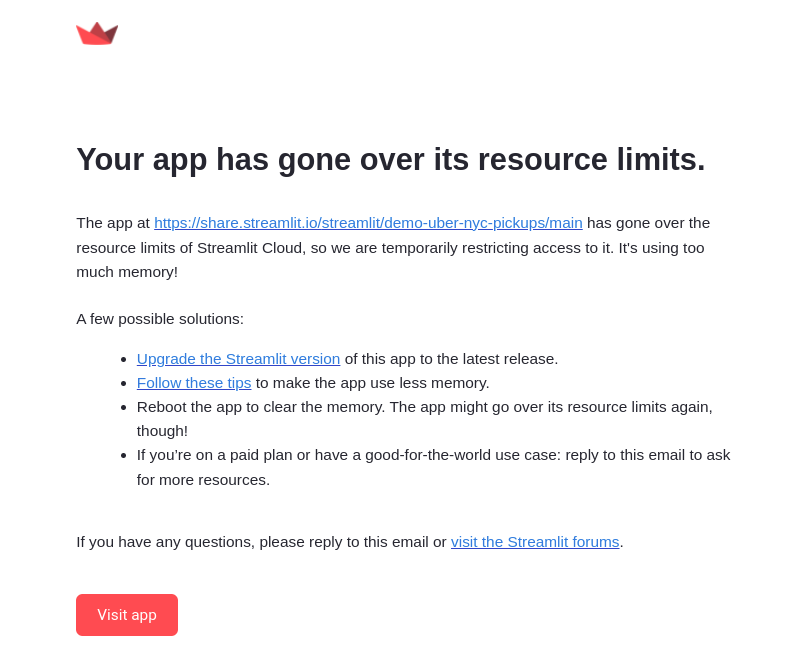 If your app exceeds its resource limits, users with view-only access will see one of the following messages when they visit your app. They will see the message on the left if your app uses an older version of Streamlit (<1.1.0) without memory fixes, and the message on the right if your app uses a newer version of Streamlit (>=1.1.0). Viewers have the option to notify you when the app exceeds its resource limits: 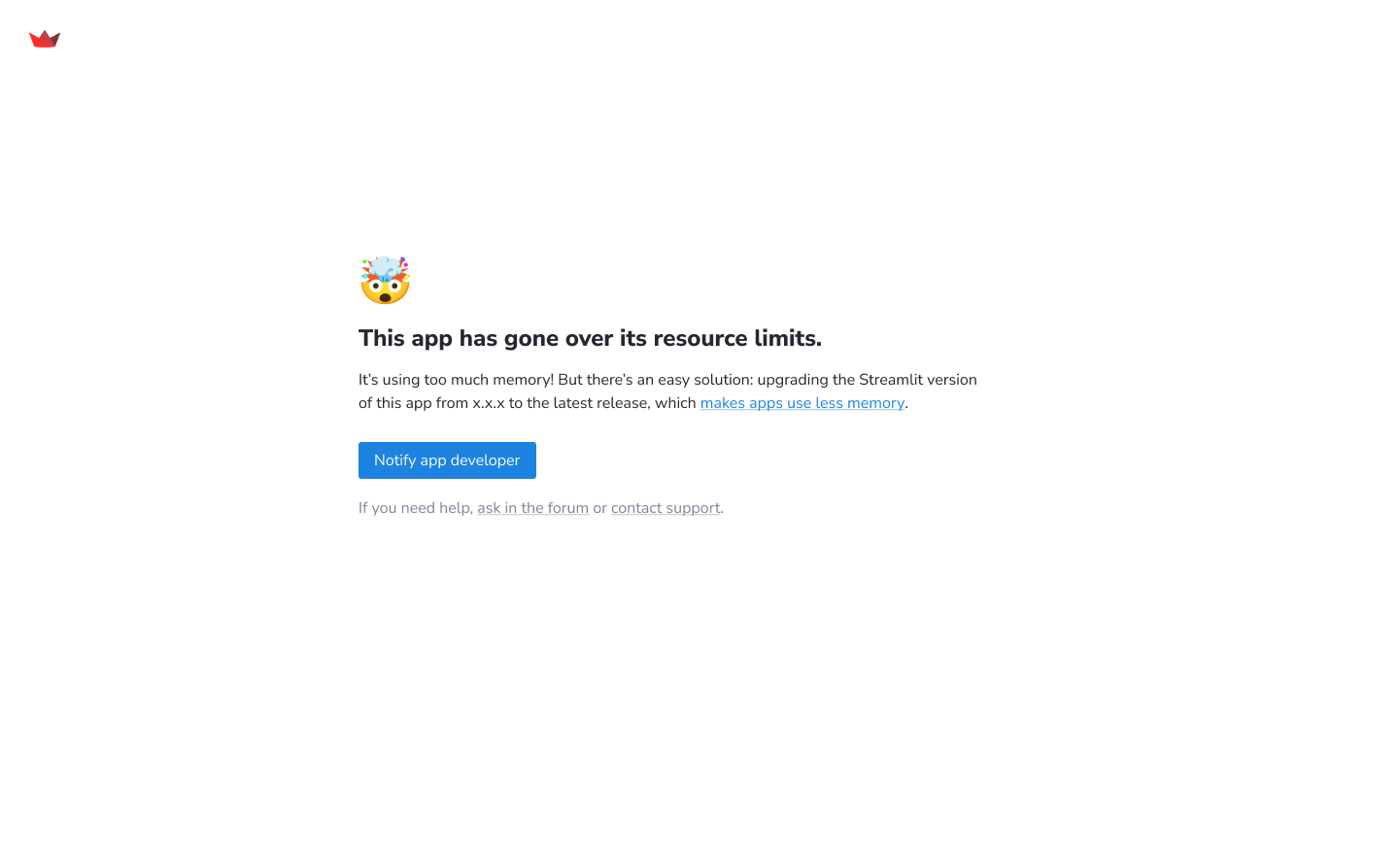 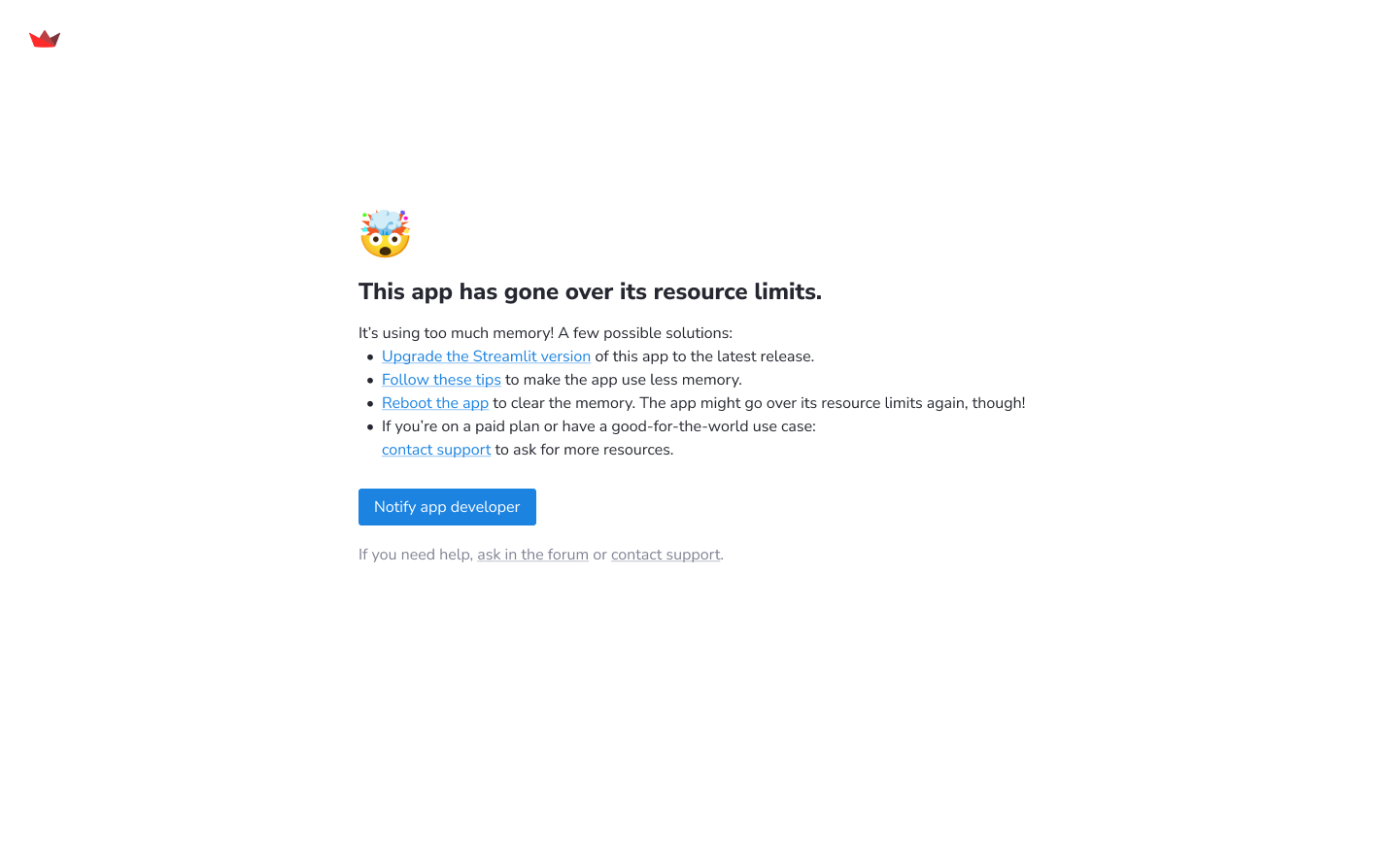 Private apps will not hibernate, but public Community Cloud apps without traffic for 7 consecutive days will automatically go to sleep. This is done to alleviate resources and allow the best communal use of the platform! Here are some need to know's about how this works:

Streamlit Community Cloud supports a "favorite" feature that lets you quickly access your apps from the app dashboard. Favorited apps appear at the top of the app dashboard with a yellow star (⭐) beside them. You can favorite and unfavorite apps in any workspace to which you have access.

Favorites are specific to your account. Other members of your workspace cannot see which apps you have favorited.

Favorite an app from your app dashboard

There are two ways to favorite an app from the app dashboard:

To unfavorite an app, either hover over the app and click the star (⭐) again, or click on the "︙" overflow menu to the app's right and click to Unfavorite.

When viewing any app in your workspace, click the star (☆) in the top-right corner of the app, besides the "☰" hamburger menu.

Click here to learn more about upgrading the Streamlit version of your app on Streamlit Community Cloud.

The Analytics Modal is visible to everyone with access to your workspace, including admins, developers, or anyone with viewer access to a workspace.

Streamlit Community Cloud enables you to view analytics data for all apps in your workspace in one central dashboard. At a glance, you get an overview of how active your workspace is and how popular your apps are.

To view your Workspace analytics:

You're presented with a graph that you can hover over to see the number of users who have viewed at least one app in your workspace that month. This viewers count includes apps that anyone in your workspace created.

In addition to a general overview of the activity of your workspace and the popularity of your apps, Streamlit Community Cloud allows you to drill down to the level of individual apps and understand their viewership better.

As an app developer or a viewer with access to a given workspace, you can see who has viewed a given app and when. Specifically, you can see the total viewers count of your app (since April 2022 and onward), the most recent unique viewers (capped up to your last 20 viewers), and a relative timestamp of their last view.

There are three ways to access the app viewers data: 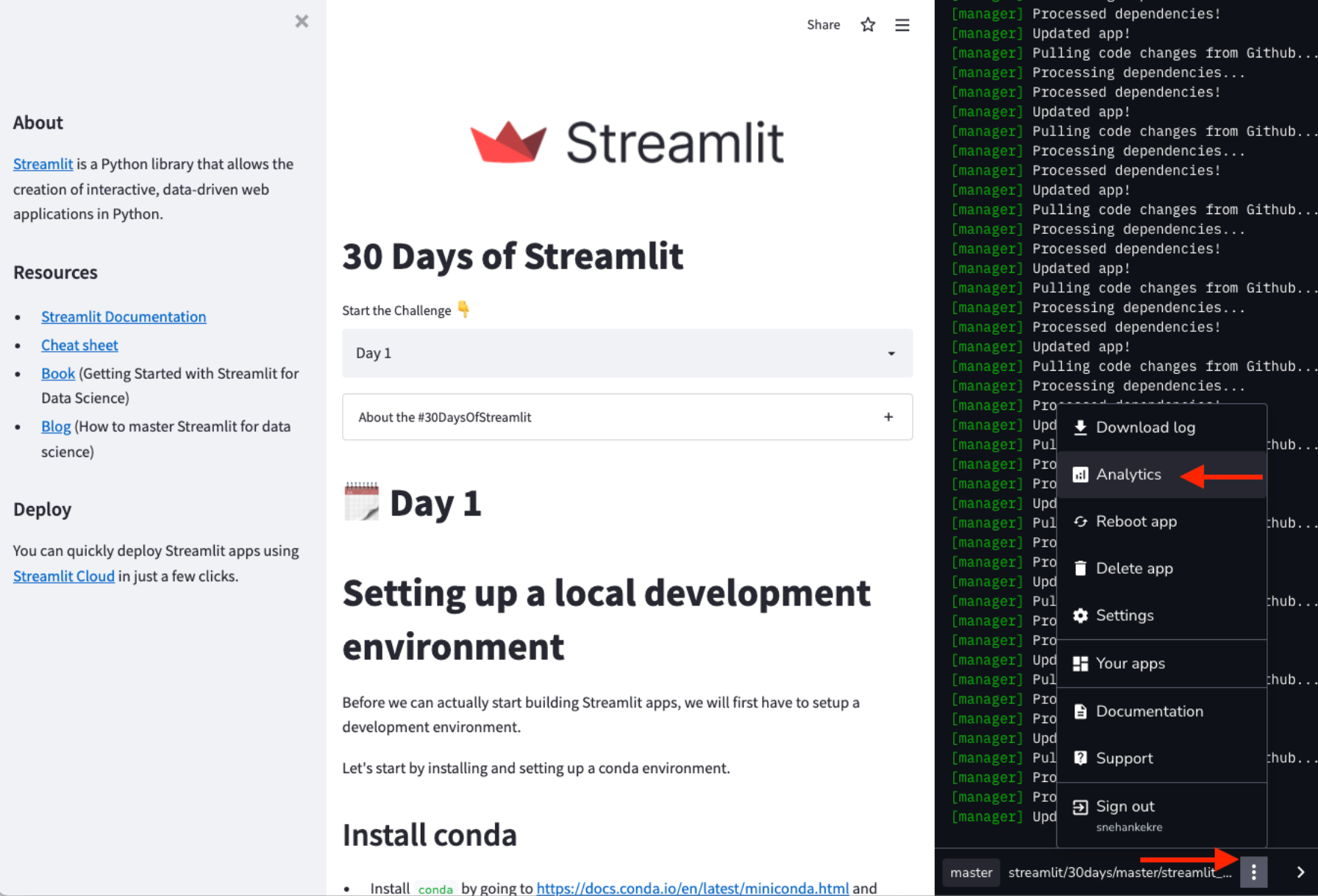 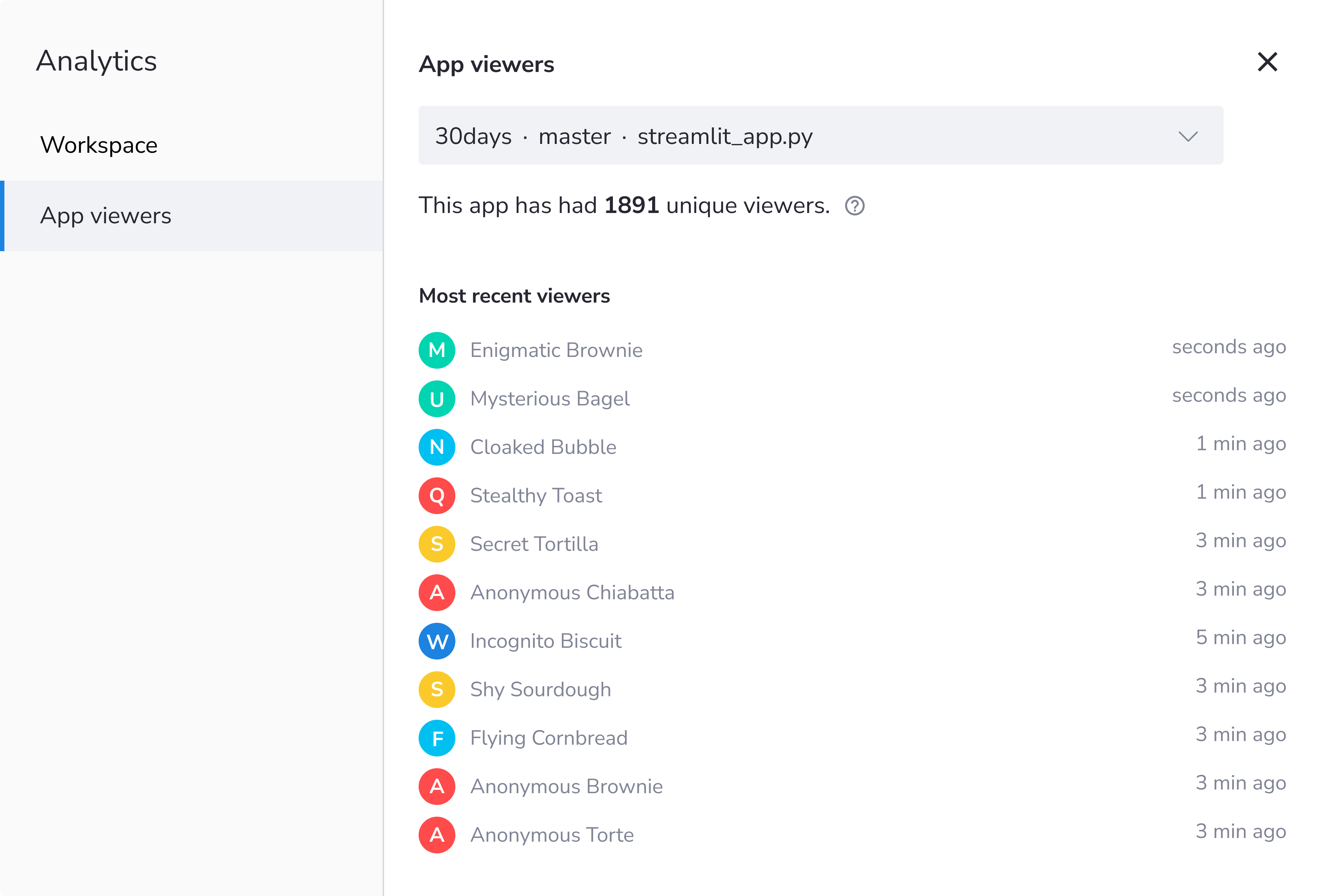 For public apps, we anonymize all viewers outside your workspace to protect their privacy and display anonymous viewers as random pseudonyms. You'll still be able to see the identities of fellow members in your workspace, though.

Meanwhile, for private apps that are only accessible to your own workspace's viewers, you will be able to see the specific users who recently viewed your apps.

Common reasons why users show up anonymously are: