Working with Streamlit is simple. First you sprinkle a few Streamlit commands into a normal Python script, then you run it with streamlit run:

As soon as you run the script as shown above, a local Streamlit server will spin up and your app will open in a new tab in your default web browser. The app is your canvas, where you'll draw charts, text, widgets, tables, and more.

What gets drawn in the app is up to you. For example st.text writes raw text to your app, and st.line_chart draws — you guessed it — a line chart. Refer to our API documentation to see all commands that are available to you.

When passing your script some custom arguments, they must be passed after two dashes. Otherwise the arguments get interpreted as arguments to Streamlit itself.

Another way of running Streamlit is to run it as a Python module. This can be useful when configuring an IDE like PyCharm to work with Streamlit:

You can also pass a URL to streamlit run! This is great when combined with GitHub Gists. For example:

While developing a Streamlit app, it's recommended to lay out your editor and browser windows side by side, so the code and the app can be seen at the same time. Give it a try!

If you are using Streamlit version 1.10.0 or higher, your main script should live in a directory other than the root directory. When using Docker, you can use the WORKDIR command to specify the directory where your main script lives. For an example of how to do this, read Create a Dockerfile.

Streamlit's architecture allows you to write apps the same way you write plain Python scripts. To unlock this, Streamlit apps have a unique data flow: any time something must be updated on the screen, Streamlit reruns your entire Python script from top to bottom.

This can happen in two situations:

Whenever a callback is passed to a widget via the on_change (or on_click) parameter, the callback will always run before the rest of your script. For details on the Callbacks API, please refer to our Session State API Reference Guide.

And to make all of this fast and seamless, Streamlit does some heavy lifting for you behind the scenes. A big player in this story is the @st.cache decorator, which allows developers to skip certain costly computations when their apps rerun. We'll cover caching later in this page.

There are a few ways to display data (tables, arrays, data frames) in Streamlit apps. Below, you will be introduced to magic and st.write(), which can be used to write anything from text to tables. After that, let's take a look at methods designed specifically for visualizing data.

You can also write to your app without calling any Streamlit methods. Streamlit supports "magic commands," which means you don't have to use st.write() at all! To see this in action try this snippet:

Any time that Streamlit sees a variable or a literal value on its own line, it automatically writes that to your app using st.write(). For more information, refer to the documentation on magic commands.

Along with magic commands, st.write() is Streamlit's "Swiss Army knife". You can pass almost anything to st.write(): text, data, Matplotlib figures, Altair charts, and more. Don't worry, Streamlit will figure it out and render things the right way.

There are other data specific functions like st.dataframe() and st.table() that you can also use for displaying data. Let's understand when to use these features and how to add colors and styling to your data frames.

You might be asking yourself, "why wouldn't I always use st.write()?" There are a few reasons:

For example, let's create a data frame and change its formatting with a Pandas Styler object. In this example, you'll use Numpy to generate a random sample, and the st.dataframe() method to draw an interactive table.

This example uses Numpy to generate a random sample, but you can use Pandas DataFrames, Numpy arrays, or plain Python arrays.

Let's expand on the first example using the Pandas Styler object to highlight some elements in the interactive table.

Streamlit also has a method for static table generation: st.table().

Streamlit supports several popular data charting libraries like Matplotlib, Altair, deck.gl, and more. In this section, you'll add a bar chart, line chart, and a map to your app.

You can easily add a line chart to your app with st.line_chart(). We'll generate a random sample using Numpy and then chart it.

With st.map() you can display data points on a map. Let's use Numpy to generate some sample data and plot it on a map of San Francisco.

When you've got the data or model into the state that you want to explore, you can add in widgets like st.slider(), st.button() or st.selectbox(). It's really straightforward — treat widgets as variables:

On first run, the app above should output the text "0 squared is 0". Then every time a user interacts with a widget, Streamlit simply reruns your script from top to bottom, assigning the current state of the widget to your variable in the process.

For example, if the user moves the slider to position 10, Streamlit will rerun the code above and set x to 10 accordingly. So now you should see the text "10 squared is 100".

Widgets can also be accessed by key, if you choose to specify a string to use as the unique key for the widget:

Every widget with a key is automatically added to Session State. For more information about Session State, its association with widget state, and its limitations, see Session State API Reference Guide.

Use checkboxes to show/hide data

One use case for checkboxes is to hide or show a specific chart or section in an app. st.checkbox() takes a single argument, which is the widget label. In this sample, the checkbox is used to toggle a conditional statement.

Use a selectbox for options

Use st.selectbox to choose from a series. You can write in the options you want, or pass through an array or data frame column.

Let's use the df data frame we created earlier.

Streamlit makes it easy to organize your widgets in a left panel sidebar with st.sidebar. Each element that's passed to st.sidebar is pinned to the left, allowing users to focus on the content in your app while still having access to UI controls.

Beyond the sidebar, Streamlit offers several other ways to control the layout of your app. st.columns lets you place widgets side-by-side, and st.expander lets you conserve space by hiding away large content.

st.echo and st.spinner are not currently supported inside the sidebar or layout options. Rest assured, though, we're currently working on adding support for those too!

When adding long running computations to an app, you can use st.progress() to display status in real time.

Streamlit supports Light and Dark themes out of the box. Streamlit will first check if the user viewing an app has a Light or Dark mode preference set by their operating system and browser. If so, then that preference will be used. Otherwise, the Light theme is applied by default.

You can also change the active theme from "☰" → "Settings".

Want to add your own theme to an app? The "Settings" menu has a theme editor accessible by clicking on "Edit active theme". You can use this editor to try out different colors and see your app update live.

When you're happy with your work, themes can be saved by setting config options in the [theme] config section. After you've defined a theme for your app, it will appear as "Custom Theme" in the theme selector and will be applied by default instead of the included Light and Dark themes.

More information about the options available when defining a theme can be found in the theme option documentation.

The theme editor menu is available only in local development. If you've deployed your app using Streamlit Community Cloud, the "Edit active theme" button will no longer be displayed in the "Settings" menu.

Another way to experiment with different theme colors is to turn on the "Run on save" option, edit your config.toml file, and watch as your app reruns with the new theme colors applied.

The Streamlit cache allows your app to execute quickly even when loading data from the web, manipulating large datasets, or performing expensive computations.

To use the cache, wrap functions with the @st.cache decorator:

When you mark a function with the @st.cache decorator, it tells Streamlit that whenever the function is called it needs to check a few things:

If this is the first time Streamlit has seen these four components with these exact values and in this exact combination and order, it runs the function and stores the result in a local cache. Then, next time the cached function is called, if none of these components changed, Streamlit will skip executing the function altogether and, instead, return the output previously stored in the cache.

For more information about the Streamlit cache, its configuration parameters, and its limitations, see Caching.

As apps grow large, it becomes useful to organize them into multiple pages. This makes the app easier to manage as a developer and easier to navigate as a user. Streamlit provides a frictionless way to create multipage apps.

We designed this feature so that building a multipage app is as easy as building a single-page app! Just add more pages to an existing app as follows:

That’s it! The main_page.py script will now correspond to the main page of your app. And you’ll see the other scripts from the pages folder in the sidebar page selector. For example:

Our documentation on Multipage apps teaches you how to add pages to your app, including how to define pages, structure and run multipage apps, and navigate between pages. Once you understand the basics, create your first multipage app!

Now that you know a little more about all the individual pieces, let's close the loop and review how it works together: 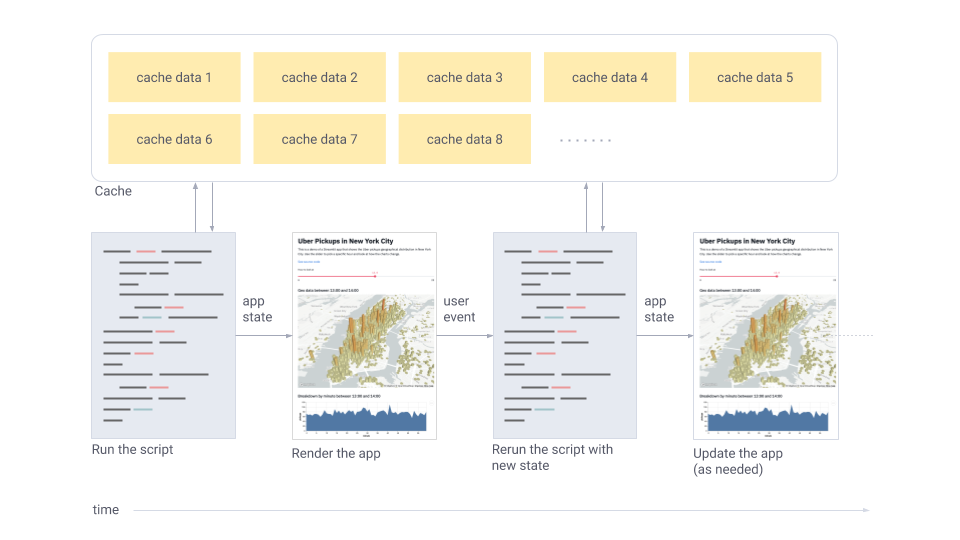